It all  started with grade 10 dance class – I don’t remember what the teacher taught – but I knew I wanted more.

Within a week I was taking ballroom and Latin dance lessons at Don Picard School of Ballroom Dance in Vancouver, BC. All my money (I was working as a waitress) went into lessons and dresses. For just over 2 years I danced, performed and competed. Then I turned 18, moved out on my own and discos became more important than dance lessons.

It was 17 years before I got back into ballroom dancing and I was amazed to discover that Don Picard was still alive and teaching (he was very old when I was 16 – he is much younger now). When I was 18 he had asked me to teach for him – I said no at that time but when he asked me again I said yes. It has turned out to be one of the best decisions I have ever made!  That was in 1989 and I’ve been teaching dance ever since and loving it!!

With Don’s great instruction I started teaching Social Ballroom and Latin. When West Coast Swing became popular (again) I learned to dance and teach it; as Country got popular I took up the 2-Step (it’s a very easy and fun dance) and then came Argentine Tango (not so easy!).

I have been to Buenos Aires 6 times . Four times I have taken students with me so they could experience the birthplace of Tango first hand. I had the good fortune of meeting Manuel Ortiz (the Black Panther of Tango) on my first trip to BA. I have since brought him and his partner, Silvia Rodriguez to Canada 3 times and I study with them when I’m in BA.

I was an adjudicator at Campeonato Intercontinental de Tango in Brazil in 2009 and in 2010 in Buenos Aires.

In August 2009 I headed for the Netherlands to study with 16 other Tango teachers from around the world at “El Corte” a very famous Argentine Tango School that has been training people for over 20 years. … and while I was in the Netherlands I taught at  Tipo Tango . … and I liked it so much I went back in 2010…. and twice more just for the fun of it!!

I have also developed other programs  – One I teach in local schools,  I developed it in 2002 – Listen to the Rhythm – the kids learn 12 dances in 8 weeks – for more information on this program check this link.

The other Transforming thru Tango  I have been developing for as long as I have been teaching; however, it was in 2008 that I gave it a name and separated it out from my regular classes.  Itfocuses on the issues & fears that come up for people when they start to learn to dance. 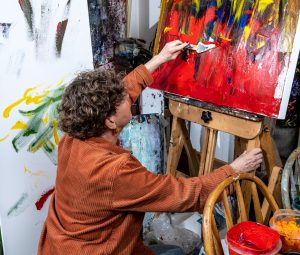 I have been collecting and selling art & working with artists most of my adult life. It wasn’t until November of 2011 when artist Sheila Norgate put up a blank canvas and said “just throw some paint on it”.  Well, … I had no idea that was the beginning of a whole new career.

I work with acrylics on canvas … and I love everything about it. I love using palette knives to create rich textures; rags to create moods & contrast; brushes to … well, the rest!

I’ve been in several shows including Sooke Fine Art, Sidney Fine Art, Moss Street Paint-In Victoria, IDS Vancouver, Calyx in Calgary and many others;  …  see the results of “Just throw some paint on it” on my art page.

Plus I organize and curate “Squared/Stretched – the Art Show” – the first show was in 2016.

2011
Started painting in November with Sheila Norgate as my mentor

In March of 2010 I started training as a Feldenkrais practitioner and graduated in October 2012. It is a 4-year program, which I did in 3 years in Seattle. I started “practising” on friends and family from the very start. I averaged 150 FI lessons (Functional Integration) between training segments. My trainers were astonished! I knew this work would change my life and I just had to keep learning.